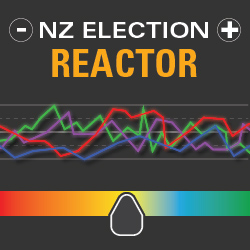 Your reactions on the political highs & lows of the week

The NZ Election Reactor is an interactive project that records your reactions to the regular 'Political highs & lows of the week' video based on a positive or negative scale. Your reactions are compiled anonymously with many others that creates an insightful look at how our politicians and political candidates faired in media coverage moment-by-moment. Results and analysis will also be published for the record as we lead up to the 2014 General Election.

Political Highs & Lows of the Week

Add your reaction to this weeks video

The NZ Election Reactor is Presented by Scoop & Powered by Roy Morgan Research.

John Key and David Cunliffe go head to head for the last time tonight and you can decide who wins by driving the worm. This is the last live Election Reactor covering the debate tonight at 7pm on TV One. You can drive the worm and watch how it rates ... More >>

John Key and David Cunliffe go head to head for the final time on TV One on Wednesday as Election Day looms. Roy Morgan wants to know what you think about their performance as the leaders try one last time to show they are the best person to be Prime Minister. More >>

Prime Minister John Key explaining the resignation of Justice Minister Judith Collins received wide agreement from those taking part in last week’s Roy Morgan Reactor. However they did not agree with Key saying voters did not care about the implications ... More >>

John Key and David Cunliffe go head to head on TV3 tonight as the election campaign moves towards its climax. Roy Morgan wants to know what you think about their views as the leaders debate tax cuts, dirty politics and just which parties are likely ... More >>

Testing Reactions To The Minor Leaders

Roy Morgan wants to test the reactions of people to those would be kingmakers – the minor party leaders. More >>

This Wednesday John Key and David Cunliffe go head to head in the election campaign again on the TV3 Leaders Debate at 8:40pm on Wednesday. Armed with your smartphone or tablet you could be having your say about their performance. Debates between Labour ... More >>

Corkery Drives The Reactor Worm Into The Ground

John Key and David Cunliffe go head to head for the first time in the election campaign in the TV One Leaders Debate at 7pm on Thursday and it is time for people to have a say about their performance. More >>

Winston Peters promise to clamp down on land sales to foreigners was rated most positively by New Zealanders last week. More >>

It looks at the Minor Leaders Debate hosted by TV3’s The Nation on the weekend. In particular it focuses on one of the most contentious issues of the campaign so far – the sale of land to non-residents. More >>

Lessons From The Reactor - Things The Worm Told Us

Voters like politicians talking positively, Kim Dotcom is a highly divisive influence, those on lower incomes and women do not like GST. More >>

John Key’s announcement that he won’t be helping the Conservatives into parliament was rated highly by New Zealanders last week. The confirmation that Murray McCully will stand in East Coast Bays, the electorate he’s held since 1987, also sent the ... More >>

Labour Leader David Cunliffe’s “apology” over male violence seems to have polarised many voters, but the first run of the Roy Morgan Research / Scoop NZ Election Reactor showed the response was largely negative across the spectrum. More >>

An Invitation To Rate the Highs & Lows of the Political Week