Police Commissioner Andrew Coster New traffic light settings Police encourage people to familiarise themselves with the new traffic light  settings which come into effect tomorrow and ensure they abide by the  requirements and restrictions. ... More >>

As the country makes the transition into the COVID-19 Protection Framework, punters will be heading out in droves. But, remember when you’re out enjoying yourself to look out for your mates and make sure they’re making good decisions around alcohol, ... More >>

Police are responding to an incident in Tuakau, Waikato. The public is asked to avoid the George St area at this time. Further information will be released when available. More >>

Police executed a search warrant at an address on Waddington Drive, Naenae,  this week at which a number of firearms and ammunition were seized. A 23-year-old male and 22-year-old female were arrested and charged with  illegal possession ... More >>

Police have today released the Improving our Response to Hate Crime Report, a summary of the views, feelings and ideas expressed by communities and people in Aotearoa on hate crime and hate incidents. The report outlines a range of opportunities our ... More >>

Police are now in a position to release the name of the man who was shot by Police following a serious incident in Glen Eden on Monday morning. He was Tex Witika, aged 55, of Auckland. He was more commonly known as Rex. Police are working to support ... More >>

01 December Police responded to a single-vehicle crash on Edmonton Road, Hornby at about 5pm today. One person died at the scene. Police are making enquiries on behalf of the coroner. The coroner will release their findings in due course. More >>

Police are now in a position to release the name of the man who died after being dropped at a Takanini medical centre with critical injuries late last month. The victim was Rangiwhero Toia Ngaronoa, aged 22 of Gisborne. Mr Ngaronoa was dropped ... More >>

A vehicle is reported to have crashed into a barrier causing congestion on the Christchurch Southern Motorway. Police were alerted to the crash at around 11:40am, near the Curletts Road off-ramp. Debris is reported to be on the road disrupting traffic travelling ... More >>

Masterton Police are appealing for the public’s help into an unexplained fire at the historic St Andrew’s Church in Whareama. 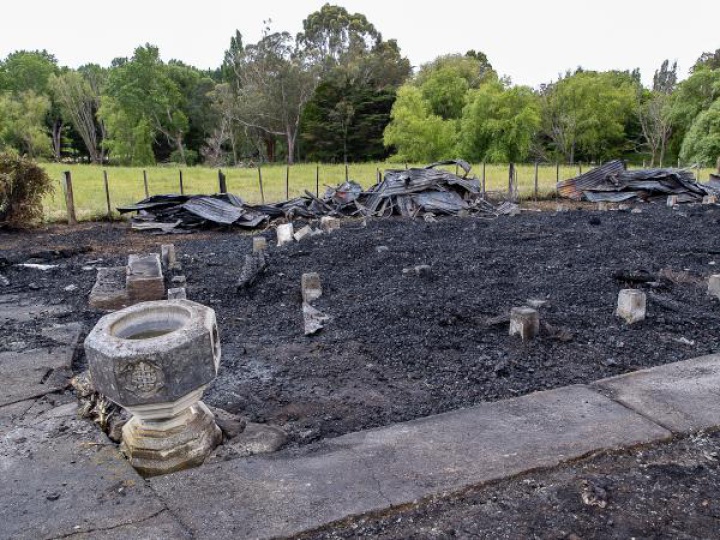 The church was completely destroyed ... More >>

An alleged dangerous driving incident involving three motorists in central Upper Hutt yesterday is being investigated by Police. At about 3.20pm yesterday, Police received multiple calls from members of the public who witnessed the drivers of a ... More >>

Police can now confirm that one person has died following a serious crash on SH2 West, Pikowai. A truck and a car collided just before midday. Sadly the driver of the car has died at the scene. Police are still making inquiries into this incident. More >>

Police acknowledge the sentencing of Kenneth Linwood, who was convicted of numerous serious historic child sexual offences this year. Linwood (61) was sentenced yesterday in the Christchurch District Court to 8 years and eleven-months imprisonment. The ... More >>

Police are responding to a report of a serious crash on SH 2 West,  Whakatāne. The crash is east of Pikowai Road and it is understood a vehicle is on  fire. Fire and Emergency New Zealand are also in attendence. Diversions are being ... More >>

Update On Shooting Incident In Glen Eden + Request For Footage

Waitematā District Commander Naila Hassan: The Police investigation continues after AOS staff shot a man in Glen Eden  yesterday morning after he opened fire on them. A post-mortem and formal identification is expected to take place this  ... More >>

Police acknowledge and accept the Independent Police Conduct Authority (IPCA) report released today, which found the arrest of a man for disorderly behaviour on 26 September 2020 in Palmerston North was not justified. In September 2020 two officers drove ... More >>

State Highway 1 near Kekerengu, north of Kaikoura, has reopened after a ute and a tanker collided. More >>

She is safe and Police would like to thank the public for their help and concern. More >>

Police are seeking information following a suspicious fire at a commercial premises early this morning on The Strand, Whakatāne. Police patrols sighted a car alight in a building on The Strand at 12:43am. The vehicle appears to have reversed through ... More >>

A man who injured three police officers after he opened fire on staff attending a call-out in Glen Eden today, has died after he was shot by Police. Police were called to the address in Danube Place, at around 8:17am with reports of a house on ... More >>