The State of NZ News Media 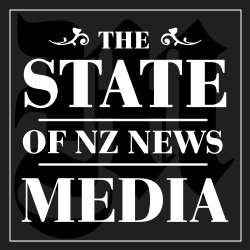 The State of NZ News Media

Over the next two months Scoop.co.nz will be publishing a series of reflections on current the state of the news media in New Zealand. The series kicked off with an article from Scoop Editor Alastair Thompson starting at the beginning of modern journalism and concluding with five starting points for the conversation, plus a suggestion about a place to start looking for a solution.

Next up was Alison McCulloch with surveys her favourite critics of the News Media, and concludes it's time to give up on the corporate media.

We would be very interested to receive submissions on the subject from anyone who has a useful perspective to add to the conversation. Please send your submissions to editor@scoop.co.nz.

The State of NZ News Media - A Public Conversation

In May & June 2015 NZ's "people powered change" platform Action Station ( @ActionStation ) conducted a survey of a sample of 3,773 of its members, asking them questions about their views on The State of NZ News Media. In the Storify Story below you will see ... More >>

n New Zealand and internationally, news services are under stress. Developments in technology are creating new forms of media, allowing the public more choice. Combined with discontent with the conventional media, this undermines their main income source: ... More >>

When I read Nicky Hager’s book “Dirty Politics”, I thought it should have been called “Dirty Journalism”. Because Dirty Journalism underpinned and enabled all that dirty politics every step of the way. It still does. More >>

Reinventing News As A Public Right - A Public Conversation

Oh how the mighty have fallen. Once journalism was possibly a noble profession, though that is certainly now, to quote our Prime Minister, a "contestable" notion. It certainly seemed at least a little noble when I joined the ranks of reporters in 1989 . But ... More >>