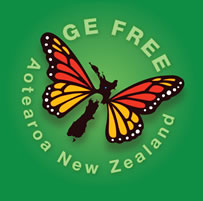 GE-Free New Zealand in Food & Environment is a non-profit organisation. We provide up to date information to the public and our members on genetic engineering.

We engage with Councils and Government writing and presenting submissions. All members are kept updated with current information that is published on GE both internationally and locally.

Minister urged to call for a review of the GM rice

GE Free NZ is calling on the Minister for Food Safety, Hon Damien O’Connor, as a member of the Ministerial Council to request that Food Standards Australia New Zealand (FSANZ) review the draft of their GM rice approval (A1138). More >>

Valuable precautionary GMO provisions in the Northland Regional Policy Statement and our democratic right to be GE-free have been secured, with Federated Farmers of NZ finally withdrawing two vexatious appeals on the GE/GMO issue and the jurisdictional ... More >>

The Govt's focus on the environment welcomed by GE-Free NZ

Alarm Bells Ring Over GE Potato Decision by Aussie Dominated Food Regulatory Body GE-Free Northland is appalled but not surprised by the latest deeply flawed decision by Food Standards Australia NZ, in which the agency approved an American application ... More >>

There is growing political consensus that keeping New Zealand a GE-free country for food production is important for economic and environmental security. More >>

Pressure on the Ministry for Primary Industries over the last two years has resulted in MPI removing controversial clause 6.4 (GE trees) from the new National Environmental Standards for Plantation Forestry. More >>

The National Environmental Standards - Plantation Forestry released today [1] gives both plantation businesses and communities clear guidelines on how to protect the environment. More >>

EPA Failings Leave New Zealand Vulnerable to Toxicity of Common Herbicide A new report on the health risks of glyphosate-based herbicides highlights major flaws in the integrity of regulations vital to the protection of New Zealand. The report released ... More >>

Sweet success at the University of Waikato’s first ever Science and Engineering Open Week. More >>

GMO Potatoes Are A Threat To Public Health

Allowing GE potatoes into the food chain in New Zealand would be a mistake and threaten public health. For the first time a GMO version of a staple food—not just oils derived from GE crops, is set to be signed off by authorities. More >>

Illegal GE flowers Could Be In NZ

The Ministry of Primary Industries has notified nurseries and plant producers that genetically modified petunias might have been illegally imported into New Zealand. [1] They have sent seed stock to testing laboratories to see if the seeds are genetically ... More >>

IS GM cotton seed oil being used in NZ restaurants?